It’s been a while since we spoke to one of Ring of Honor’s finest so what better way to get back in the ROH groove than to speak with Jimmy Jacobs (right). The leader of the Age of the Fall is without out a doubt one of the brightest young stars in professional and appears to be finally hitting his stride with the AOTF. Some of the topics Jacobs addressed were:

* The genesis of The Project 161 viral campaign

* The brains behind The Age of the Fall

* What the future holds for the faction

* The addition of Joey Matthews to the team

* His time in Wrestle Society X

* Any interest from WWE or TNA?

After being stuck in wrestling hell (known to some as mid-card status in TNA) Austin Aries is now thriving all over again wrestling for Ring of Honor.

This past Saturday, he and ROH champ Nigel McGuinness wrestled in a potential Match Of the Year candidate at the Manhattan Center in New York City (since the match was taped for PPV I won’t spill the beans as to who won).

In case you forgot, it was Aries’ amazing matches in ROH that lead to TNA signing him in the first place. His debut in TNA came after he won an online poll to face Christopher Daniels at TNA: Sacrifice in August 2005 (Aries beat out Matt Sydal, Roderick Strong and Jay Lethal in the poll). His match with Daniels eventually led to him getting signed by the company, however, he never seemed to get a strong enough push to succeed (sound familiar?).

Efforts to repackage Aries into “Austin Starr” also failed and after getting suspended from the company in April 2007 the Wisconsin-native asked for his release.

As you will hear in our in our interview below, Aries has officially moved on from his experience in TNA and is focused on the future. Take a listen as Aries talks about the year to come and even shares his views on the state of the industry. 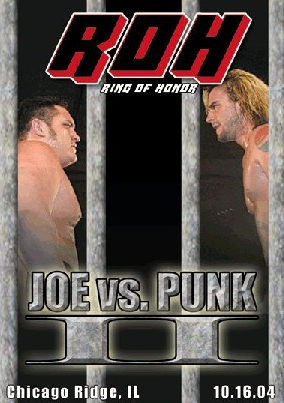 Most wrestling fans will look at the title of this post and think this will be about TNA. Sorry to disappoint but as much as we love some of the personalities in TNA wrestling we would never think of bestowing them with such a compliment. ‘WWE light’ seems more a propos.

The real new face of professional wrestling is based in Pennsylvania not Tennessee. They wrestle in a traditional ring not a six-sided one. And, most importantly, they don’t make any of their wrestlers wear reindeer or turkey costumes if they lose a match. Ladies and gentlemen meet the best kept secret in combat sports: Ring of Honor.

The Park has been accused of covering ROH more than any other pro wrestling company out there. This is true for two main reasons:

1. They are the only company that has not banned us from talking to their athletes. True story.

2. We truly believe that while there may not be a crossover between fans of boxing/MMA and WWE/TNA, our entire audience will really love the ROH product.

To help officially introduce everyone to Ring Of Honor we invited Pulse Wrestling‘s ROH savant, Aaron Glazer, to give us a history lesson on the promotion and to discuss what the future holds for it. Take a listen below.

(Can’t listen to the interview right now? Download this one and all of our great interviews by clicking on the iTunes or Odeo link at the top right of the page.) 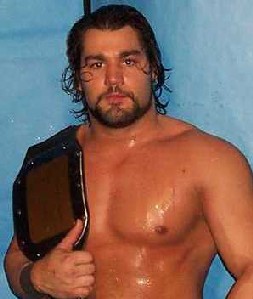 If you’re a fan of World Wrestling Entertainment chances are you’ve already heard of Brent Albright…sort of.

Remember that young guy who made his debut all the way back in ’06 as Chris Benoit’s protege and defeated Booker T in his first match on WWE television much to the shock of, well, everyone? That was Brent Albright – known then as “Gunner Scott.”

I always like it when WWE debuts guys as huge underdogs and have them shock the world in their first appearance on the big stage (see Cena, John). It sets them up for a nice little run at the beginning of their careers. If done right, of course.

That wasn’t the case with Albright. He lasted only four months in WWE and while he has certain theories as to why his time on the main roster was so short you’ll have to listen to our interview to find them out (how’s that for a tease).

Albright has certainly landed on his feet, though. He has been wrestling for Ring of Honor for over a year and has put on some great matches for them and a bunch of other Indy promotions too.

Take a listen as Albright talks about ROH, his time with WWE and his thoughts on the tragedy involving Chris Benoit.

Ask any professional wrestling fan about Larry Sweeney and their eyes instantly light up. That’s because 26-year-old Sweeney is regarded as one of the true rising stars of the business.

While his work in the ring is solid its his delivery on the microphone and “managerial skills,” for lack of a better word, that has reminded many wrestling fans of some of the greatest performers ever. Some have even labeled him as the second coming of Bobby “the Brain” Heenan. For a wrestler with only three and a half years of experience under his belt those are some pretty big shoes to fill but Sweeney appears ready for the challenge.

He can be found wrestling on many Indy wrestling cards across the country – most notably for Chikara Pro and ICW. However, its his work in Ring of Honor as the leader of “Sweet ‘n’ Sour Inc.” – a stable of wrestlers reminiscent of the classic Heenan Family – that has made him one of the most talked about performers of 2007.

If you have yet to see Sweeney’s work in ROH don’t fret. The promotion offers up their latest pay-per-view offering, Man Up, beginning 11/30. Sweeney’s role on the card will be managing one of his top clients, Chris Hero, in a Four-Corner Survival Match against Nigel McGuinness, Claudio Castagnoli and Naomichi Marufuji. An impressive quartet to say the least.

I had the chance to speak with Sweeney about his young career, the lost art of the promo, his future in Ring of Honor and his one-time appearance on Monday Night Raw. Not surprisingly, he was a great interview.

Without a doubt, Claudio Castagnoli, is one of the brightest young stars in wrestling.

The Swiss-born Castagnoli crafts his trade all over the independent wrestling scene but can be seen on a national stage through the Ring of Honor wrestling promotion.

While the 26-year-old Castagnoli has already held several world titles he has really come into his own within the last year as a main eventer in ROH.

Last year, it appeared as though all of Castagnoli’s hard work had paid off when he signed a developmental deal with World Wrestling Entertainment. However, WWE severed ties with Castagnoli just five weeks after signing him. Rumors circulated that it was because he didn’t have a proper working visa but Castagnoli has repeatedly proclaimed that he is completely legal to work in the US.

Clearly, Castagnoli has put that strange incident behind him and is enjoying arguably his best year as a pro wrestler. He signed a long-term deal with ROH and recently won their Race to the Top Tournament.

I caught up with Castagnoli to discuss his current ROH run, his relationship with WWE, the independent wrestling scene, the now-infamous San Francisco wrestling convention and whether or not wrestlers deserve an off-season.

Bored by the soap opera-like product being churned out by the like of World Wrestling Entertainment and/or TNA Wrestling? Well, you need to check out Ring of Honor pronto. A throwback wrestling promotion if there ever was one, ROH continues to produce the best matches of the year and are manufacturing the same kind of loyal fan base the orginal ECW was known to have.

For the last five years, ROH was a nice little independent wrestling promotion that relied on its DVD sales to stay afloat. However, this past summer things began to change. ROH made its pay-per-view debut and to say the show was widely accepted by the wrestling community would be a major understatement.

Clearly, WWE and TNA have taken notice of ROH since they keep plucking away their talent. What do Samoa Joe, CM Punk, Homicide and Jay Lethal (to name a few) have in common? They all made their initial name in ROH. (Maybe we like ROH so much because they kind of remind us of the Montreal Expos. We know all too well about losing homegrown talent to the big bucks).

Coming off a huge weekend in the Northeast in which the promotion presented Glory By Honor VI, I reached out to ROH owner, Cary Silkin, to discuss how he got involved with ROH, their initial foray into the PPV world and what lies ahead for everyone’s favorite “independent” wrestling promotion.