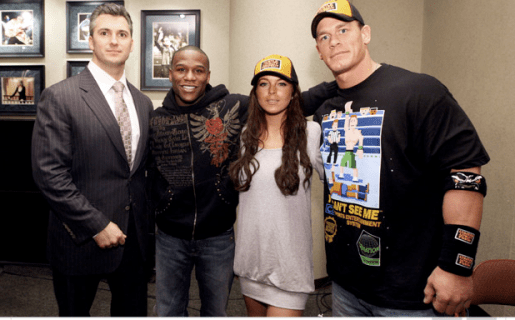 1. I gotta be honest, I wasn’t a huge admirer of how the Mayweather-Show angle progressed on RAW. I dunno, it kind of felt a little flat. I’m certainly not giving up on it just yet and maybe I was bit too excited for RAW but, still, I thought it could have been handled better. Thankfully, it didn’t end with the apology and Money May actually came back. I’m sure it will get better but something about how it started threw me off. I love watching Leonard Ellerbe act, though.

2. Nevertheless, a great episode of RAW. Everything made sense and really made me want to see ‘Mania (which is shaping up to be quite the memorable show).

3. The opening segment, while predictable, was solid. As was the main event. I will never like the idea of a triple threat match for the WWE title at Wrestlemania but these guys should provide great promos leading up to 3/30.

4. Little things like Orton coming out before Cena bug me. The champ should never come out first.

5. My money in the bank pick? Jeff Hardy.

6. Santino is quickly becoming my all-time favorite wrestler. Seriously, this man is brilliant. His facial expressions after Maria’s win were great.

7. Paul Burchill reminds me of the 2008 version of the old Val Venis. I think it’s the combination of his hair, his delivery and the fact that his gimmick is a blatant attempt to create controversy. That said, I kind of dig the new Burchill. Anything’s better than dressing up as a pirate…right?

8. So, it looks like we’re getting Flair v. HBK. I guess it could be worse. If I were in charge, though, I would have had HBK call out Flair to address the crowd and then superkick his ass. That would have made some jaws drop.

9. I love the guy but Jim Ross seemed a bit off tonight.

10. Not a big fan of Jeff Hardy’s or Mr. Kennedy’s new entrance music.

11. Why are guys like Snitsky and Mark Henry always built up as these feared monsters when all they do is lose?

12. Best segment of the night? The McMahon-Finlay storyline. I loved JBL’s involvement in it and Poor little Hornswoggle really sold it well. The star of the whole segment was definitely Finlay. Consider me very intrigued.

13. Speaking of which, and I forgot to mention this in yesterday’s Muesli, don’t you just love it how Lawler and Ross stay quiet when trying to sell an important angle. They did the same thing with the Mayweather-Show confrontation at No Way Out. Sometimes less is more my friends. Unfortunately, a Mr. West and a Mr. Tenay have yet to learn that lesson. It’s actually gotten so bad that I watch iMPACT! in mute. I swear.

14. Oh and how did they not show La Lohan on camera? I hope they offered her all the money under the stars to appear in an angle because that would have definitely sent our celeb-crazed universe in a tizzy.

By the way, I’ll be appearing on Fight Network Radio Tuesday afternon at 3:00 pm EST to discuss an unbelievable weekend in combat sports. Check it out on Sirius channel 186 or listen online at Hardcoresportsradio.com. As always, I can’t wait to talk combat with those guys.