Quite the weekend in the world of mixed martial arts. If you were sad and lonely at home but just so happened to have an interest in the sport then this was the perfect weekend for you.

But the (obvious) big question is: who scored the highest on our weekend report card. Let’s have a look-see…

D: Fighting and Entertainment Group:
I know I should be thankful that I am getting to see DREAM for free via HDNET, but, seriously now, those broadcasts are just way too long. I like my MMA telecasts just as much as the next guy but I am not down with spending five hours watching an event especially when a collective two hours are spent looking at a wide shot of the Saitama Super Arena while Bas Rutten and Kenny Rice talk about lord knows what. Let me be clear in stating that I know this isn’t HDNet’s fault but more so FEG’s since they are the ones booking all these ridiculously long shows. And, for the record, I was not left as enamored with the show as others were. Sure, there were some great fights but I think the fact that it dragged so much killed it for me.

C: Jason “Mayhem” Miller:
I have always enjoyed Mayhem’s antics in-and-out of the ring/cage. I love fighters who don’t take themselves too seriously and no one does it better than Mayhem. However, for some reason, his shtick got under my skin yesterday. Basically, he made Frank Shamrock look like the most sportsmanlike competitor around. His behavior probably had something to do with the fact that this was his first time fighting in Japan and, surely, he wanted to make a good first impression. The entrance was cute, the wink during the stare down was funny but all the other stuff was completely unnecessary and quite disrespectful to Shibata. Was that the warrior spirit he likes to talk about? I should probably give the man props for a dominating and convincing victory too.

Honorable Mention: Ross Pointon – Welcome back to the win column!

READ THE REST OF THE REPORT CARD HERE 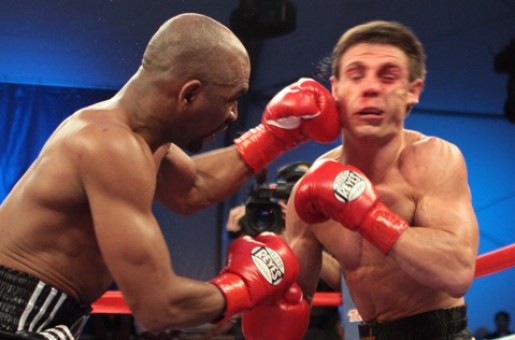 It was a fairly quiet weekend on the MMA and wrestling front but not so in the world of boxing. Some had a great 72 hours while others not. Let’s break it down:

Good: Boxing – Normally, I hate all those “boxing may or may not be dead” articles but, damn, we’ve had enough fight of the year candidates to fill up the entire calendar.

Bad: Malaipet Sitprapom – Might want to brush up on that MMA rulebook

Good: Librado Andrade – After a tough loss to Mikkel Kessler a year ago Monday, Andrade is 3-0 and has been winning in impressive fashion. Is Bute next?

Bad: Andy Lee – Manny Steward might have learned that all that glitters is not gold.

Good: Me – I got engaged…to a real girl.

Good: Joel Casamayor – Another tremendous performance. Nate Campbell may be in trouble.

It was a very quiet weekend at The Park and, unfortunately, that may be the case for the next couple of weeks. Busy times in the real world (i.e. work) so I really can’t complain but, that said, we may be a little light on interviews. Don’t worry though – plenty of me to go around!

On that note, let’s look at who enjoyed the best weekend of all:

10) Strikeforce – First, they land on NBC (forget the timeslot – this little train that could is officially a major player) and then they sign Kazuo Misaki. Not bad.

9) Jake Rosholt – Amazing power but I was expecting a tad bit more.

8 Eddie Alvarez – Another great performance in just his second time fighting in Japan.

7) Kala Kohole Hose – He finally gets his shot at the ICON Sport Middleweight title and, deservedly, wins it.

4) Joachim Hansen – The winner of Dream.1’s fight of the night.

2 & 1) Juan Manuel Marquez & Manny Pacquiao – If these men didn’t deliver the fight of the year I can’t wait to see what is.

Final note: I invite you to join the official JarryPark.com NCAA tournament pool. Let’s see which Park resident is the best guesser.

When it comes to the world of combat sports weekend is king. In other words, promoters usually book their big matches/fights on the weekend. Makes sense.

However, just once, JUST ONCE, I would love to see them flip-flop so we can watch Wrestlemania, for example, on a Saturday night. How cool would that be? (What? You couldn’t care less? Bullocks.)

So, what is the point of this post, you ask? Well, every Monday we’ll recap the weekend that was in the world of combat sports. Think of it as the cliff notes version of everything that went down in our world. Now YOU will rule the watercooler.

I know we are not a news site and have no aspirations to become one but I think this weekly post just makes sense.

Ok, enough chatter, let’s get right to it:

* Undefeated WBO Super Featherweight champ, Joan Guzman (28-0, 17 KOs), defeated hard-hitting Humberto Soto (43-6-2) via unanimous decision at The Borgata on Saturday night. The loss marked Soto’s first in five years or 22 fights. Whichever way you want to look at it…that’s a long time. Could Manny Pacquiao or Juan Manuel Marquez be next for Guzman? One should hope so.

* NABO Bantamweight champion, Abner Mares (15-0, 9 KOs) looked dominant in a victory over Damian Marchiano (14-3-1, 5 KOs). Mares, a 2004 Mexican Olympian, should be in line for a world title shot sooner rather than later.

* In Germany, Alexander Dimitrenko (27-0, 17 KOs) won via TKO in the 12th round over Timo Hoffman (36-6-1, 20 KOs) to retain his WBO Intercontinental Heavyweight title in a fight (according to those who saw it) which was the best of the weekend.

* Mayweather-Hatton 24/7 debuted last night on HBO and, boy, was it amazing. I strongly feel that this one will be better than the last. Hatton and Mayweather are such polar opposites it just makes for great television.

* UFC 78 made their first appearance at the Prudential Center in New Jersey and, well, it wasn’t a strong first impression. Rashad Evans won a split decision over Michael Bisping, Thiago Silva schooled Houston Alexander and Karo Parisyan did just enough to get past Ryo Chonan. Elsewhere, Joe Lauzon and Frankie Edgar continued to look great.

* Dana White announced that Dan Henderson will finally move down to 185 lbs to challenge Anderson Silva for his Middleweight title at UFC 82 in March. Can’t wait for that one.

* Strikeforce held a four-man Middleweight tournament won by Jorge Santiago. What this means for Mr. Santiago I’m not quite sure.

* Sean Salmon appears to be doing just fine after suffering an apparent seizure after getting knocked out by Santiago with a flying knee less than a minute into their bout.

*Following Cung Le’s victory over Sammy Morgan Mr. Friday Night, Frank Shamrock, pretty much challenged him to a fight although who knows if that will ever see the light of day.

* While not what it used to be, WWE Survivor Series was still a great event. The big news was that Randy Orton retained his title against HBK and Batista, thanks to a returning Edge, defeated the Undertaker to keep his Heavyweight title. The lone “traditional Survivor Series match” had HHH and Jeff Hardy remain as the sole survivors.

* “Rowdy” Roddy Piper disappeared from an Indy Show in Marion, IN. Piper was supposed to host an edition of “Piper’s Pit.” How great were those back in the day? Let’s take a trip down memory by looking at one of the greatest moments in “Piper’s Pit” history: The day jobber Frankie Williams went toe-to-toe with Hot Rod.

And now you are officially caught up. Please tell us what you thought of the weekend in the comments section below.

Miss anything big? Want us to cover your event? Drop us a line at tips@jarrypark.com.