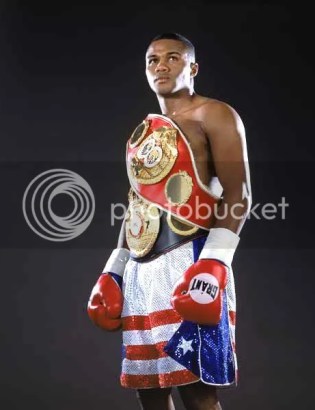 I would like to take this moment to retract any and all negative comments I have made over the last few weeks with regards to a potential Kelly Pavlik vs. Felix Trinidad bout. As you may recall, when I first heard the rumor that this fight was being discussed I became deeply depressed. I thought it would be a step back for Pavlik and would ultimately prove nothing.

Then, I read that Pavlik-Taylor II only generated 225,000 pay-per-view buys and, instantly, I saw the light. If Felix Trinidad can get 500,000 people to pay 50 bucks to watch him lose to Roy Jones Jr. I bet he can at least get 350-400,000 to purchase a Pavlik-Trinidad tilt. Maybe even more. It’s sad to say but Pavlik needs the rub. At this point, he won’t get it from anyone but Trinidad.

Furthermore, I can’t help but wonder if Kimbo Slice had anything to do with that low buy rate? Now, I know the Pavlik fight was on pay-per-view and Kimbo’s fight wasn’t but I also know a ton of casual fight fans who chose to watch Slice-Abbott over what was sure to be a great rematch between Pavlik-Taylor.

When The Ultimate Fighter 6 Finale‘s pulled in a great rating on Spike on the same night as Mayweather-Hatton (1.8 household; 2.8 in the Male 18-34 demo) it proved that there isn’t a huge crossover between MMA and boxing fans anymore (or ever was). However, this particular case may prove to be a little different because Slice is more popular to the general Joe Sports Fan than Pavlik and Taylor combined. Sad, I know, but true. However, Pavlik is way too good to have only 225,000 buys attached to his first title defense.

Bob Arum must learn from the Kimbo Phenomenon and if he wants to expose Pavlik to the world he needs to match him up against a personality and icon like Tito Trinidad. Fans buy fights to see fighters they love or hate get it on. For the most part, they prefer flash over substance. That’s why the UFC did whatever it had to do to sign Lesnar and are passing on the likes of Matt Lindland. That’s why UFC 81 will highly surpass UFC 82 in PPV buys. It’s also why Kelly Pavlik should fight Felix Trinidad as soon as he can.