There’s just something about those ring girls. Everyone loves them and we here at mmarated.com are no different. So, with that in mind, I present a most enlightening interview with one of Strikeforce’s exquisite ring girls, the lovely Nicole Craner.Nicole is actually one of the friendlier ring girls I’ve come across lately . Heck, she’s even an mmarated.com member! So, it was no surprise when she answered all my stupid questions in an honest, sincere and fun manner.Some of the topics we discussed included:* How she got involved with Strikeforce
* Her MMA knowledge (quite impressive I must say)
* Sitting cageside for Le vs. Shamrock
* Her desire to someday work for the UFC
* Does she like any fighter out there like, you know, more than a friend
* Have any fighters ever hit on her?Oh, and we also played a quick little round of my favorite dinner party game: F, Marry, Kill. Some of the candidates involved were Scott Coker, Rachelle Leah, Gilbert Melendez, Dana White and Urijah Faber. Good times indeed. 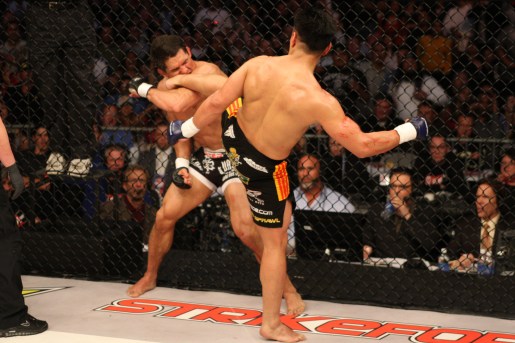 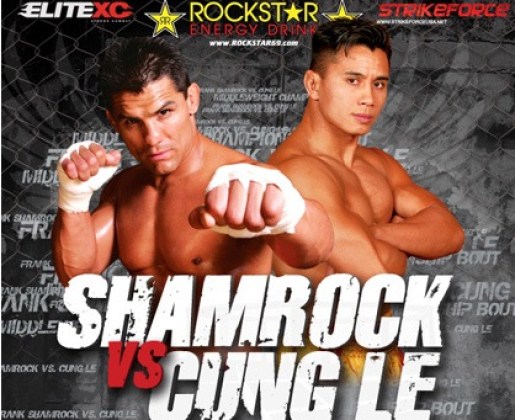 Below is the audio from the call. My two favorite parts were when Gary Shaw said that Ken Shamrock had “some sort stomach ailment” prior to the Buzz Berry fight and that the former “world’s most dangerous man” personally told Shaw he still wants a piece of Frank.

See promoter. See promoter trying to salvage what was once a big money fight.

Listen, I get trying to build up your fighters. But I don’t understand making completely outlandish comments like Frank Shamrock is the best fighter in the world. We don’t believe it, you don’t believe it so why not just say he is a legend, a pioneer and all that good stuff?

As far as conference calls go I would give this one a six and that had nothing to do with Frank Shamrock doing his usual hard-sell job. Isn’t it funny how Shamrock tries to disrespect and insult Le every chance he gets yet Le continues to ignore him and never respond? I never really had any strong feelings about Cung Le prior to this bout but his ability to stiff arm Frank despite all his fabricated promotional tactics is quite fun to watch (or listen).

Note: Shaw also mentioned that we should expect a press release tomorrow where a bunch of the fights for the first Elite XC on CBS card will be officially announced as well as the announce team.

You might have heard that a certain Bob Sapp was making his American MMA debut this evening at the StrikeForce At The Dome show in Tacoma, WA (HDNet 10:30 pm ET). This fight also marks Sapp’s debut in a cage…Wait, what? You’ve never heard of Bob Sapp? Well, if so, you’re in the minority my friend.

North American pro wrestling and/or boxing fans might get a pass for not knowing who the Beast is but all that might change very quickly. The former National Football League bust made a HUGE name for himself in Asia as a dual MMA/kickboxing legend for K-1 and PRIDE.

It’s hard to truly explain how popular Sapp is (or was) overseas but I think the following three videos will do the trick. They’re Japanese commercials starring Mr. Beast himself in all his hilarious facial features glory. I dare you to watch these and not laugh hysterically (and, just for the record, I have nothing but love for Sapp. I think he’s a brilliant showman). He actually starred in over 20 of these commercials overseas, released an R&B album and even had a variety store devoted to all things Sapp. Forget MMA, could you imagine any popular athlete in our culture acting like this on television? The only one I can think of might be Gilbert Arenas of the Washington Wizards but I doubt he could be such an effective salesman.

Recently, WWE and TNA have talked with Sapp about working for their respective promotions but nothing ever materialized. Something tells me he might be headed back to Japan sooner rather than later.

By the way, Sapp is facing Jan “The Giant” Nortje in the main event of a card that also features Maurice Smith vs. Rick Roufus, Joe Riggs vs. Cory Devela, Jorge Masvidal vs. Ryan Healy and Brad Blackburn vs. Ray Parales.

Take it away Bob…

The last time MMA fans saw Strikeforce‘s Light Heavyweight champion, Bobby Southworth, compete was less than two weeks ago. Unfortunately, it came in a disappointing loss to Anthony Ruiz due to a cut he sustained in the second round. Fortunately for Southworth, though, the fight was a non-title bout so he remained champion at 205 lbs.

In speaking with Southworth earlier today, I got the sense that the San Jose Native is just itching to prove his worth all over again. This seems to be old hat for the 37-year-old Southworth.

Almost seven years ago, he accepted a fight against Vitor Belfort for Pride in which he lost via rear naked choke in round one. He never received another chance to compete in a Pride ring again.

Then came his much-criticized appearance on the first season The Ultimate Fighter in which he struggled mightily (an understatement) to make weight for his first fight against Lodune Sincaid (a fight he would win) and was involved in a few incidents outside the gym with Chris Leben. Southworth had one chance to prove himself on a live UFC show (the TUF Finale in 2005) but after losing a decision to Sam Hoger he was never seen again in the Octagon.

Needless to say, Southworth has reinvented himself as the top Light Heavyweight in Strikeforce but he will undoubtedly be forced to prove himself all over again whether it’s in a rematch against Ruiz or against the promotion’s newest signee – Renato “Babalu” Sobral.

Below, Southworth disusses his fight against Ruiz, the possibility of facing Sobral and his tumultuous appearance on TUF.