That date will forever signify the end of my innocent obsession with sports. Once the Montreal Expos, my Expos (and yes they actually did had fans), played their final out things started to change. Simply put, I began to loathe sports. The one thing I could count on had finally betrayed my trust. You see, it’s one thing for your team to lose a heartbreaking playoff series. Those hurt but there’s always next year. It’s another for them to simply disappear and never play another game again. The latter is a pretty terrible feeling.

Shockingly, time (as it usually does) began to heal my wounds. I needed to find a silver lining in this mess. So, I decided to get to know some of my other favorite teams a little better. Surely I could find happiness through their exploits, right? Wrong. Growing up the teams I passionately followed were the New York Knicks, the Buffalo Bills and the Montreal Canadiens. Now, let’s see: The Knicks are generally viewed as the biggest laughing stock in sports. The Bills haven’t made the playoffs in the 21st Century and the Canadiens, once the gold standard on the ice, haven’t made it passed the second round of the playoffs since 1993.

As I began to grow tired of the traditional team sports I found myself paying more attention to a trifecta of combat sports: mixed-martial-arts, boxing, and pro wrestling. Maybe it’s because they represent everything team sports are not. Or maybe it’s because I draw some kind of enlightenment from watching two guys beat the crap out of each other. Who knows? 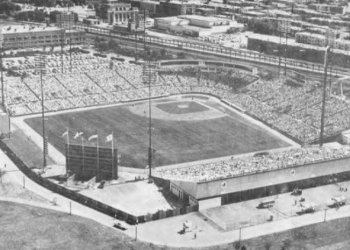 At this point it only made sense to become “the free agent fan.” I never formally made this announcement to the world. I never offered my services up on eBay. Nor did I ever appear via satellite from my basement on Cold Pizza. It just kind of happened. I even thought about naming this site freeagentfan.com but I never want to be viewed as some disgruntled ex-sports fan. We all hate those guys. Then I remembered where it all began. The one stadium I would have loved to visit but will never have the chance: Jarry Park – the first home of my first love (the Expos). When I think about those lucky enough to attend a game at Jarry Park I am filled with envy. It seemed like the most joyous and serene place to enjoy a sporting event.

I know most, if not all, of you couldn’t care less about the Expos or Jarry Park. Trust me, this site will not be a shrine to either institutions. It’s not even a baseball site. It’s just that whenever I think of Jarry Park and what it stood for (in my mind, at least) I am reminded of why I love covering sports so much. Until this day, Jarry Park no longer existed. Well, I’m bringing it back and instead of hosting baseball games it will be the new home to all things combat.

Rest assured you’ll never just be hearing my voice on the site. Every day we’ll feature several special guests. I have worked in the television and radio business for several years now and have met some amazing people. They’ll drop in from time-to-time and hopefully hook me up with some great guests too.

Welcome to Jarry Park: The Coliseum of Combat Sports. Touch ’em up.