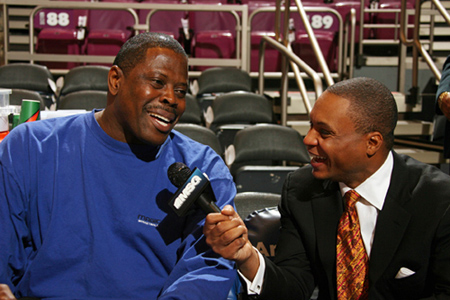 Anyone who’s listened to my appearances on Fight Network Radio knows that I am an unabashed Mauro Ranallo supporter. I have no problems saying that I think he’s the best play-by-play man in the combat sports world. Just my opinion, don’t get all worked up.

So, today’s news that Mauro has been (finally!) tabbed to call the 5/31 Elite XC on CBS card alongside longtime CBS Sports announcer, Gus Johnson, is probably the best thing I have heard all month.

Johnson gets his feet wet in the MMA world while the rest of the world is exposed to Ranallo. Sounds like a good deal. Johnson will handle the play-by-play duties alongside Ranallo, Frank Shamrock and Showtime boxing reporter Karyn Bryant.

As a longtime New York Knicks supporter (please hold the comments), I am well aware of Johnson’s wizardry on the mic. Someway, somehow he’s always calling the most exciting games and his reactions throughout said games are always tremendous.

Ranallo and Johnson might be two of the most easily-excited broadcasters in sports so this pairing will probably end up being the ultimate match or a colossal clash. I’m thinking, given the talent we’re dealing with here, it will be the former.

One thing to watch out for is how Ranallo handles being in the Stephen Quadros analyst role. This is certainly new territory for him.

For those who are somehow unaware of Johnson’s fantastic abilities, please take a look at the following video and then join me in getting really excited.

Update: I contacted Ranallo to get his thoughts on the announcement and this is what he had to say:

“Gus Johnson is doing the play by play, Frank Shamrock is doing the x and o’s. I will be humanizing the fighters with anecdotes and Ranallo flair. I’m the Max Kellerman of the crew, just better looking. Ha ha!”

Oh that Mauro, always a jokester. Of course, he was kidding about the whole Kellerman thing. Everyone knows Max is the fairest of them all.