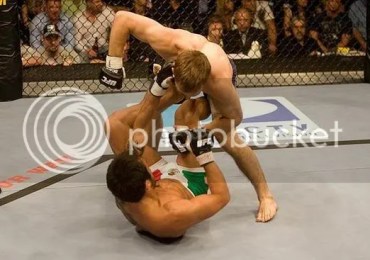 Remember Roger Huerta’s first fight after appearing on the cover of Sports Illustrated at The Ultimate Fighter 5 Finale show? Remember that unknown Alaskan whom everyone thought was being served up to Huerta to pad his record a little more? Remember thinking midway through the first round of their fight “who is this guy?” Well I sure as hell do.

Not much was known about Alaska’s Doug Evans (5-1-0) (throwing the punch above) going into that bout in June 2007. However, I bet a lot of fans were scouring the Internets to find as much as they could about him following it. Sure, Evans lost to Huerta but if one could ever derive a victory from a loss that fight would be the perfect candidate.

I don’t know about you but I have been anxiously awaiting Evans’ return to the Octagon  to see whether the seven-time Alaska State Freestyle and Greco Roman Wrestling is the real deal. And it looks like we’ll get that opportunity next month as Evans is scheduled to face Canadian Mark Bocek (4-1-0) at UFC 79.

That contest definitely has all the makings of a potential fight of the night as you have the wrestling champ (Evans) going up against the BJJ black belt (Bocek). These matchups excite me.

I had the chance to speak with Evans about his upcoming fight against Bocek, his first UFC fight and his background in the sport.