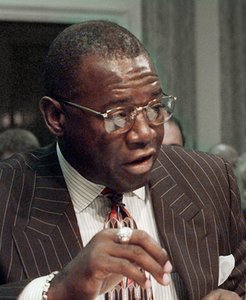 Days before the UFC makes its return to New Jersey for the first time in over two years, the New Jersey Athletic Control Board rocked the combat sports world in announcing the firing of well-respected commissioner, Larry Hazard, effective immediately.

The 62-year-old Hazzard, who has worked as commissioner since 1985, was let go by Attorney General Anne Milgrim late Wednesday night. According to the Newark Star-Ledger, Hazzard claims he was fired because he decided to write a letter to New Jersey Governor, Joe Corzine, complaining about some of the people working under him. He was upset over someone on the Board sanctioning MMA mismatches, clearing a fighter that had not proved he was HIV negative and allowing promoters to look for doctors who would clear questionable fighters. I guess his “complaints” (the nerve, eh?) pissed off Attorney General Milgrim.

Speaking of pissed off, Golden Boy Promotions East president, Bernard Hopkins is just that. Moments ago he released this letter to the press:

I am shocked and appalled at the decision by the New Jersey States Attorney General Anne Milgram and her office to dismiss Larry Hazzard from his services as longstanding head of the New Jersey State Athletic Commission. I am standing up to renounce this decision and I encourage all members of the boxing community—fighters, trainers, judges, promoters, commissioners, television networks, and the media—to join me in protesting this decision.

What’s most disturbing is that they not only did they do this the same day he buried his 41-year old nephew, but they also admitted that “Commissioner Hazzard did nothing wrong. It was just time for a change.” (Atlantic City Press, Nov. 16.) This might be a change that they needed but it is certainly not a change that boxing needs. We were just fine with Larry Hazzard as a leader in our sport.

Larry Hazzard for the past 22 years has run one of, if not the most, efficient and ethical Commissions in boxing. From a fighter’s viewpoint, he championed safety and welfare for all of us, whether we were champions or just four-round fighter. He was always looking to improve the sport and never feared speaking his mind for the greater good of boxing.

The bigger question here, and as far as I know, Ms. Milgram did not consult anyone within the boxing community to get opinions to base her decision on. Boxing is a difficult sport anyway and how are they going to be able to replace Larry Hazzard with someone who is as competent as he is? I have to use the old saying here, “if it ain’t broke, don’t fix it!”

Thank you,
Bernard Hopkins
Light Heavyweight Champion of the World

It’s going to be very interesting to see how many other big names from the worlds of boxing and MMA speak up against Hazzard’s firing. Hazzard was very instrumental in breathing new life into the UFC after Zuffa purchased the dying promotion in 2001 and I wonder if Dana & Co. will have anything to say about his dismisal since they are, you know, in New Jersey right now for UFC 78. Thus far, I have heard nothing.