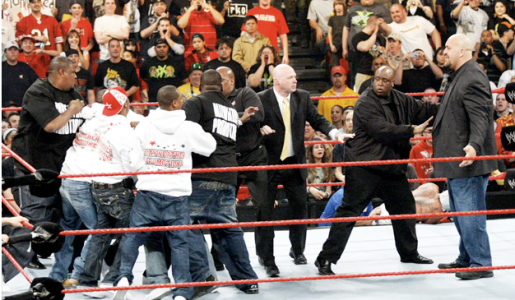 ***Update: The (UK) Sun has good report and a video clip of Mayweather’s appearance. Click here to check it out.

Random WWE No Way Out Thoughts…

1. Wow. Money. May. Wow. The best boxer in the world on WWE TV? Wow. This is bigger than Tyson because Tyson was washed up by the time he arrived. So, that said, why wasn’t his appearance advertised? They could have just mentioned he would be in attendance because I bet a lot more people would have purchased the show had they known Mayweather would be there.

2. Love the angle with Big Show but does this mean we are getting Mayweather v. Big Show at WM 24? I mean, wow (sorry I keep repeating that but I had NO IDEA this one was coming and am still in shock). Who’s behind this? Mark Cuban?

3. Please get rid of the ECW title. It’s worth less than the late Hardcore title right now

4. The bleeding mouth Gogoplata spot is so weak. We’ve all seen a real gogoplata and no one bleeds from it. I dig the fact that ‘Taker has employed this new MMA style but the blood cheapens it

5. Not even the Elimination Chamber could get Big Daddy V and Khali to have a good match

6. This Flair storyline has lost a lot of steam. It just doesn’t seem special

7. While we’re at it, I hope these HBK-Flair ‘Mania rumors are false. How does HBK benefit from defeating Flair? That spot should go to Kennedy or MVP (my pick would MVP)

8. If Mysterio’s injury was as bad as it was made out to be, why the hell did he wrestle? He wasn’t the champ, he wasn’t supposed to win…so what was the point? The Mayweather angle could have easily been done without him having to wrestle.

10. I hated the triple threat match at WM 20 and I know I will hate this one. I’m sorry but there is no good reason why this match needs HHH. Okay, maybe one good reason (hint: he’s married to the boss’ daughter)

11. No surprise in the fact that I enjoyed the Raw Chamber match more than the Smackdown one. For a split second I actually thought Hardy might win but, alas, reality kicked in

12. If you would have told me that following Pavlik-Taylor II and Kimbo v. Tank that the event I would be most impressed by would be this PPV I would say your nuts. However, that’s exactly how I feel. It’s almost as though Vince & Co. said “um, don’t forget about us.” By the way, take Mayweather out of the equation and I might feel a little differently but, nevertheless, great job last night. I actually wrote to Large after the show and this is what he said:

“Money has…a hell of a publicist.”

When it comes to big events, sports fans love to talk about how February is the worst month of the year. I tend to disagree but one thing I will say is that World Wrestling Entertainment’s annual February pay-per-view, No Way Out, is one of the stranger events on the calendar. It’s not TNA Lockdown strange but the fact that it comes between the Royal Rumble and ‘Mania always make it feel a little underwhelming.

That said, I was looking back at some of the old matches and suddenly realized that No Way Out always seems to produce memorable moments. Foley’s first retirement, Lesnar-Guerrero, the rebirth of the nWo, Hogan-Rock II and much more. For a show that’s stuck between the top two events of the year it’s a pretty impressive list.

So, will the No Way Out magic continue tonight? Not so sure about that one just yet. Sure, there will be two Elimination Chambers on the card (although the EC has never really done it for me) but the problem lies in the real problem of holding a pay per view in February. By now, we’re pretty certain as to what ‘Mania will look like so there aren’t many surprises out there. Unless something drastic happens it appears as though we’re getting Edge vs. Undertaker and Cena vs. HHH at ‘Mania. The only real questions are whether Randy Orton will squeeze his way into the main event with HHH and Cena and whether or not Rey Mysterio will compete tonight after suffering a torn right bicep in Santiago, Chile a couple of days ago.

So, yeah, like I said in the first place, you should probably tune in tonight. Carry on.