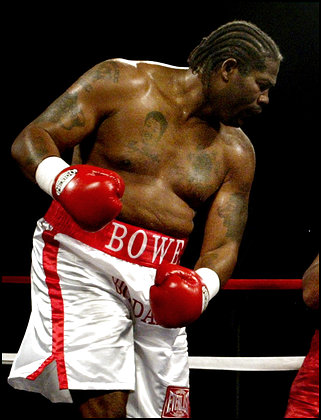 Stop the presses. Another boxing “legend” of the past wants to enter the world of Mixed-Martial-Arts.

According to Josh Gross of Sherdog.com, Riddick Bowe, the former WBC Heavyweight champion, is looking to try his hand at MMA. Bowe spoke with Gross last night at the Circus Nightclub in Hollywood, CA, to announce his “tentative” MMA debut on December 12th. Bowe told Gross:

“I’ve been running, doing things as I was doing them in boxing…I guess now all I have to do is get down with the ground work.”

So what’s the reason behind the Bowe’s new-found interest in Mixed-Martial-Arts?

Beautiful…just what we need. Another Ray Mercer on our hands. But now that I mention it maybe there’s money in a fight between Bowe and Mercer’s first (and presumably last) MMA opponent – Kimbo Slice.

The 40-year-old-Bowe was last seen in a boxing ring in April 2005 where he defeated Billy Zumbrun in a disgraceful fight. But maybe a showdown with Kimbo can rejuvenate a once promising career. Somewhere Gary Shaw ponders…