I hate to ever question a fighter’s heart or ability but, gosh, that certainly looked like a tank job to me. That said, take nothing away from Kimbo. He looked like a beast in the cage and most experts, including myself (although I’m certainly no expert), are starting to take the former street-fighting legend seriously.

The next logical bout appears to be against Tank Abbott. Tank has even entered the Frank Shamrock school of marketing by creating a YouTube video mocking Kimbo (although he desperately needs to up the production value of his clips…that was beyond weak).

I spoke to Kimbo’s trainer, Bas Rutten, about Saturday’s fight, whether he thought Cantrell took a dive, and what is next for Mr. Slice.

Also, El Guapo and I discussed the IFL’s announcement of a new Featherweight Division, the IFL World Grand Prix in general and where he thinks Ben Rothwell will be fighting in ’08 (hint: some guy named Fedor just signed with them).

As always, great to have Rutten back at The Park.

(NOTE: In our interview, I said M-1 holds their fights in a cage when the correct answer is actually a ring. My apologies to Monte Cox, Marc Ecko, Vadim Finklestein and maybe Mark Cuban…still not sure about that one.)

Bas Rutten is no spring chicken. The former UFC Heavyweight champion and three-time King of Pancrase has been arould the world of Mixed-Martial-Arts longer than most. So it made perfect sense when I first heard that Rutten (aka El Guapo) would be training Kimbo Slice as he enters the world of MMA.

Surely by now you’ve heard of Kimbo. Internet sensation, street-fighting legend, huge guy who dismantled former boxer Ray Mercer – for better or worse, the man is the talk of the combat sports world.

When I spoke with fellow Elite XC fighter, Jake Shields, he had this to say about Kimbo’s Elite debut:

Shields may have a point but one can’t deny the intrigue surrounding Saturday night’s fight and who better to give us the real low down on how Kimbo preparing for bout against Bo Cantrell than his trainer, Bas Rutten.

In our interview, Rutten talks about how he first met Kimbo, his prediction for this weekend and the negativity surrounding his MMA debut.

And, finally, one last Kimbo video for all his fans out there in street-fighting land. 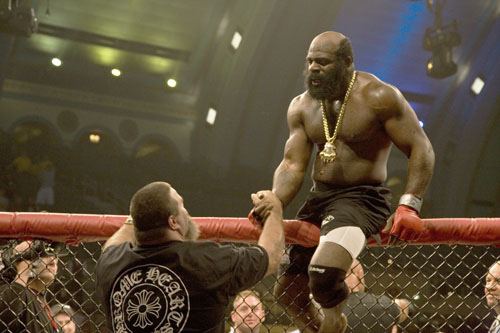 Who knew that putting up a Kimbo Slice video would illicit such excitement. I received more mail about that video than any interview posted on this site thus far.

That said, I am working diligently in getting an exclusive interview with Kimbo before his Elite XC debut this Saturday night but in the meantime we will have to settle on his trainer, MMA Legend Bas Rutten.

My interview with Rutten should be up later today. In the meantime, enjoy a video of Rutten training Kimbo. Could you imagine being in the gym with these two?