Referee Steve Mazzagatti (left) is quickly becoming one of the most recognizable faces in mixed martial arts. He’s worked some of the best fights in MMA history and is currently giving Don Frye a run for his money in the most famous moustache in MMA department.

So, naturally, we had to invite him JarryPark to talk about his illustrious career inside rings and cages across the world. We also talked about:

* The genesis of the ‘stache

* The art of refing a fight

* His take on the Emerson-Maynard decision

* His views on the way MMA fights are scored

Definitely interesting to hear a side of the fight game we often never hear about.

We’re just a couple of days away from UFC Fight Night 12 and if this one’s half as good as UFC 80 then, well, it will be great! And you know what? Top to bottom this card (on paper) looks like it should be better. It’s a safe bet that Mike Swick vs. Josh Burkman, Patrick Cote(!) vs. Drew McFedries and Alvin Robinson vs. Nate Diaz will be exciting but there are tons of great untelevised fights too.

One of the more intriguing ones has Gray “The Bully” Maynard (4-0-1) battling Dennis Siver (11-4-0). And guess what? Maynard was kind enough to stop by The Park to discuss his upcoming bout against Siver. He also spoke about:

* His gameplan going into the fight

* His thoughts on the decision seven months later

* His nine-second KO over Joe Veres

* His thoughts on Couture being sued by the UFC

(Can’t listen to the interview right now? Subscribe to our site by clicking on the iTunes or Odeo link at the top right of the page and you can listen to all our great interviews whenever you want.) 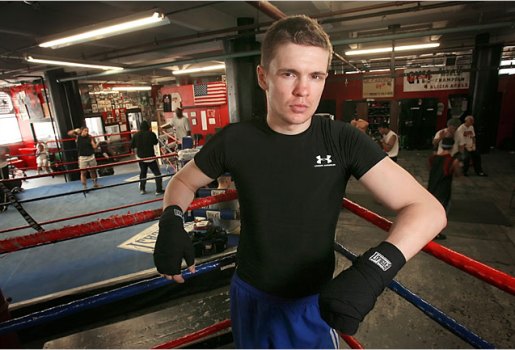 Yesterday was certainly a great day for MMA and boxing fans. Some get all emotional about which sport is better but not me. I just like it when one event airs in the afternoon and the other in the evening. And based on my expectations prior to each event, I thought both were well worth my time. We’ll discuss them more later in the week.

Speaking of boxing and MMA, pro boxer Yuri Foreman (24-0, 8 KOs) stopped by to discuss his budding career and his last win against Andrey Tsurkan. Last month’s victory of Tsurkan was tremendously important for the Belarusian because he needed a big win following a lackluster performance against Anthony Thompson on the undercard of Judah-Cotto. Whether a win over Tsurkan qualifies as a “big” win is another question but at least he looked dominant.

So what does this have to do with MMA, you ask? Well, take a listen as Foreman discusses a potential switch to mixed martial arts, his Sambo training with Paulie Malignaggi and his thoughts on Fedor. Could Foreman be the first big name boxer to make the leap? Only time will tell but his interest certainly seems piqued.

(photo courtesy of Robert Caplin of the New York Times)

If you’re a loyal visitor to The Park you might have noticed some subtle changes around these parts. First, we now present a daily combat sports interview instead of bunching them up on any given day. The reason for this is we like to give our listeners at least 24 hours to digest everything a fighter has to say.

Another exciting modification is this new “Saturday In The Park” post that will conveniently run on Saturdays (also my way of paying homage to that great Chicago song).

So to break up the daily awesomeness of our interviews, The Park will present something light, fun and a bit wacky from the combat sports world each and every Saturday. Today, it’s another amazing installment from the world of Japanese Bug Fighting!

The first time I posted one of these epic clashes, I quietly received a lot of praise for discovering one of the greatest forms of combat sports ever invented. So, here we are again. This time it’s a wasp against a mantis. The bugs are fighting at a catch weight of 0.5 lbs.

This one is a little Randy Couture vs. Tim Sylvia mixed with Roy Jones Jr. vs. John Ruiz. That little wasp – he sure does have a ton of fight in him. Meanwhile, the poor mantis’ head seemed to be elsewhere on this particular evening. Some have called this the 2008 version of David slaying the Goliath. Perhaps, but I just look at it as a wasp executing a tremendous game plan from the get-go.

Oh, and enjoy UFC 80 and/or Trinidad-Jones. Much to the dismay of my wallet I will be watching both. Should be a fun little Saturday in the park.

Anthony “Rumble” Johnson is responsible for one of the best knockouts of 2007. His disposal of Chad Reiner in just 13 seconds at Ultimate Fight Night 10 in June was as solid a UFC debut a fighter can hope for. At UFC 76, it appeared as though the 23-year-old Johnson would go 2-0 in his UFC career but Rich Clementi caught him a rear naked choke and brought him back to earth.

Now, Johnson (4-1) looks to get back to his winning ways on April 2nd at UFN 13 against Tommy Speer. Yes, the same Tommy Speer that stopped by the Park just a couple of days ago. Funny how that worked out, eh? Take a listen as Johnson talks about:

* His bout against Speer

* His tough loss to Rich Clementi

The Park goes a little country today as we welcome TUF 6 finalist, Tommy Speer, for a talk on all things, well, Tommy Speer. Topics discussed included:

* His upcoming fight against Anthony Johnson at Ultimate Fight Night 13 on April 2, 2008 in Denver, CO

* His thoughts on Johnson

* How their styles match up

* His unlikely road to the TUF 6 finals

* His experience on the show

* His contract status with the UFC

* His relationship with Matt Hughes

* His thoughts on Matt Serra’s behavior on TUF

* The big one: Has he read Matt Hughes’ book

UFC Heavyweight contender Justin McCully stopped by The Park today to discuss a whole host of MMA/wrestling topics. Some of the issues we talked about included:

* How he missed a chance to fight Cheick Kongo

* Why he deserves to fight the winner of Kongo-Herring

* His ten-year journey to UFC stardom

* How he got involved in professional wrestling and MMA

* His experiences while wrestling in Japan

If you’ve seen McCully’s appearances on HDNet’s “Inside MMA” you know the man brings a lot of knowledge to the table. Add to the fact that he has a background in professional wrestling and he’ll always have a permanent seat at the JP Head Table.

It’s time for another edition of “The Angle Diaries” starring, you guessed it, TNA Heavyweight champion Kurt Angle. This week we cover:

* His bout against Yuji Nagata

* More on his relationship, or lack thereof, with the IFL

* His thoughts on Ken Shamrock

* Why he hasn’t competed in an MMA match yet

* How much Elite XC offered him to fight for their promotion

* How Floyd Mayweather would fare in an MMA match

As always, Angle was very candid so this one is definitely worth a listen. After all, these are “The Angle Diaries.” 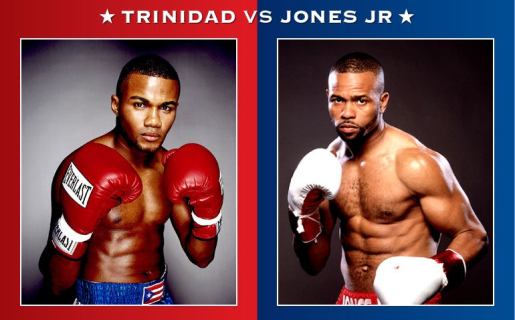 The boxing world is buzzing over this showdown between two legends of the ring (not really).

Fans are willing to pay $5,000 to seat ringside for this bout (I would love to meet those “fans”).

A win by Jones over Trinidad could get his name back in the mix (questionable).

This is an interesting one. There has been virtually no buzz surrounding this fight, yet, when you look at what these fighters have accomplished one would expect a little more excitement from boxing enthusiasts. Perhaps it has something to do with the fact that after losing three in a row, Jones has only defeated a couple of tomato cans in Prince Badi Ajamu and Anthony Hanshaw.

Nevertheless, at least he’s been keeping active. Trinidad, on the other hand, hasn’t fought since his loss to Winky Wright in May 2005. In fact, he has only fought three times since September 2001.

In an effort to get the boxing world talking about this one, Jones and the incomparable Don King recently held a conference call to discuss the upcoming bout, why we should care about it and who Jones is looking to fight next. (By the way, it may have just been a poor phone connection, but am I the only one who thought Jones sounded a whole lot like Riddick Bowe?)

Oh, and I think David Banks is still knocked out.