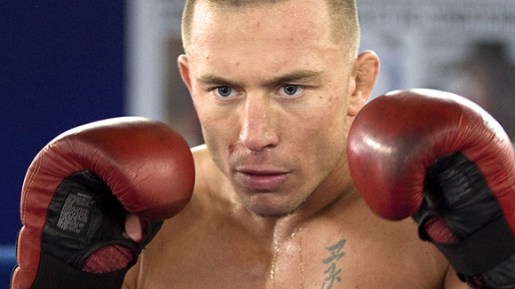 By now you’ve heard the news that Mark Coleman has been forced to pull out of his UFC 87 fight against Brock Lesnar due to a torn MCL. I guess that’s the risk in promoting a fight featuring a 43-year-old five months in advance.

While Coleman’s injury is certainly a bummer, the UFC did help turn our frowns upside down by announcing today that Georges St. Pierre will defend his newly-won welterweight title against Jon Fitch at UFC 87. I have a feeling this fight was going to take place on this card anyways but it certainly softens the Coleman injury blow by announcing both items on the same day.

This is the second-time in six months that GSP has been used to “save” a card. Of course, he recently stepped in to replace an injured Matt Serra at UFC 79 against Matt Hughes. It’s safe to say that he has officially paid the UFC back for pulling out of two major fights in the past; A September 2006 rematch against Hughes and a February 2007 fight against Serra.

Meanwhile, UFC 87 is shaping up to be the battle of the really nice guys and that might seem a little strange to us after a string of intense grudge matches. We’ve had GSP-Serra II, Penn-Sherk, Tito-Dana and, coming up, Jackson-Griffin. UFC 87 features St. Pierre, Fitch, Roger Huerta and Kenny Florian – four of the nicest fighters in the sport. Don’t expect a ton of trash-talking coming from these candidates (although, I must say that Huerta and Florian have been showing signs of fire as of late).