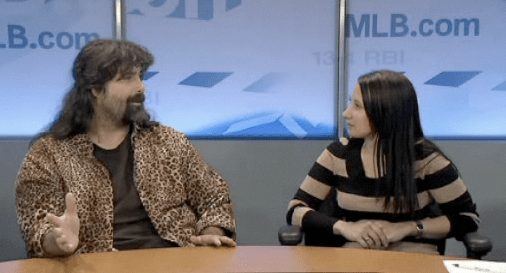 Very excited to see Mick Foley back in the WWE mix, especially in his current role. Of course, the hardcore legend is now the color analyst on Smackdown and, in case you haven’t been paying attention, he’s doing, expectedly, a masterful job. Foley seems to understand the business and, more importantly, the art of selling a storyline to the public better than most.

On a seperate Foley note, he appeared on MLB.com’s “The Dish” to talk about meeting Barry Bonds and a bunch of other things. I could have sworn that I saw him wearing the exact same leopard shirt outfit on Smackdown a couple of weeks ago (or was it last week?).

This certainly isn’t new territory for Foley as we all know his wardrobe cycle is quite limited but now that he is representing the sport on the other side of the camera, so-to-speak, I think he needs to clean up his act a little. Basically, the look worked as a wrestler but not so much as announcer.

And before you tell me wrestling announcers are supposed to have their own style (see: Ventura, Jesse) let me say that I completely agree with that notion. Except Foley looks more like the guy who hangs out at the corner of my street than a man wearing sunglasses and boa. I think it must be the hair. I am glad to see wrestling move on from the long hair, fanny pack days. That was a much need evolution. However, it appears as though Foley didn’t get the memo.

I will always love his work but, for some reason, his appearance in this video just sort of rubbed me the wrong way.

2 thoughts on “Mick Foley Needs To Clean It Up”