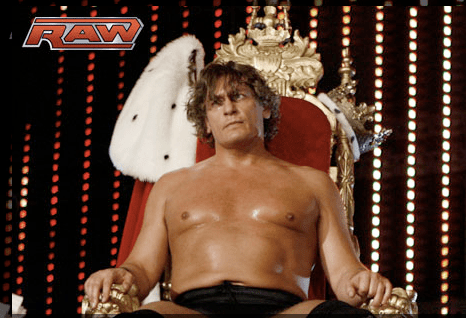 Monday night, WWE brought back the King of the Ring tournament and built a three-hour edition of Monday Night Raw around it. The tournament itself was full of great stories and action. I particularly enjoyed the champion vs. champion clash between MVP and Chris Jericho, Khali injuring Finlay and William Regal getting lucky by having to face Hornswoggle in the first round as well as an injured Finlay in the semi-finals. We witnessed the ascension of CM Punk to a big time player despite getting pinned clean by Regal in in the tournament finals. King Regal is an easy gimmick but one has to wonder why this prestigious title was given to someone who doesn’t wrestle regularly and is usually made to look like a fool. The optimist in me would hope that he is finally being given the push he deserves while history says he will probably be jobbing to Triple H next week and have his nose up Mr. McMahon’s ass by Memorial Day.

Also on the show was a huge main event featuring all three world Ccampions and all the respective title challengers at Backlash this Sunday. These types of star-studded matches usually turn out great and this was no exception. Who knows, it may have even sold some people on Chavo/Kane II (no…not really).

Finally, as much as I dreaded the proposed Election skit (see: Rosie vs. Trump), I have to admit that it was quite funny. I always wondered where Umaga stood on abortion rights, gun control and taxes. Now I have my answer!