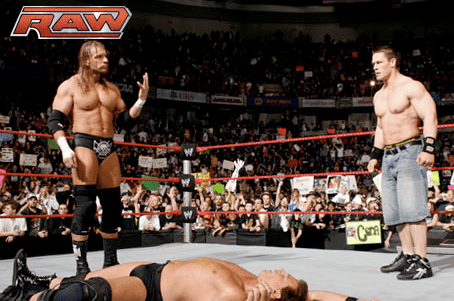 * Orton, Cena, Triple H & JBL for the WWE Title at Backlash.  Which one doesn’t belong?  Hmmm, I wonder. Why would they build JBL up the entire night, calling him “the longest reigning champ in Smackdown history,” and then make him look like a fool in the main event.  Strange…

* Put the tag straps back on London & Kendrick.  Of the four tag teams featured last night, they were the most impressive.  Although I must say that Santino’s post-match celebration was quite funny.

* Ric Flair was involved in the best segment of the show…..and he wasn’t even at the show!  Great job by WWE’s production team on that package.

* Here’s a tough one: What would you rather watch:  a) paint dry b) the Chavo\Kane contract signing on ECW.  C’mon guys do you really expect people to care about this nonsense?

* You would think they could get a better support structure for the obscenely expensive Jeritron 5000 HD?  I fully expect that thing to drop one of these days…

* The main event was OK, but again, at the end three guys were standing while one was laying not looking too good.  Hopefully JBL gets his heat back in a couple of weeks.