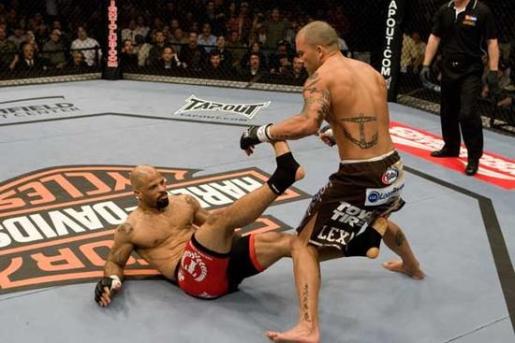 The last time the UFC held an event in Colorado was on December 16, 1995, and while it took over twelve years to return they definitely made up for lost time with an explosive Ultimate Fight Night card. Stunning KOs, surprising finishes and a hot crowd made for another exciting night of fights courtesy of the Ultimate Fighting Championship. Let’s take a look at the main storylines coming out of the show:The Kenny Florian train continues to roll since his loss to Sean Sherk in October 2006 with a victory over Joe Lauzon. A great showing by Lauzon fighting in his first UFC main event but one has to wonder what kind of damage that cut on the top of his head did to his psyhce. I’m guessing not much since he had plenty of opportunities to finish Florian in the first round. J-Lau has nothing to be ashamed of as I think this fight solidifies the fact that his days of fighting on the untelevised fights are over for good.So, Houston Alexander may not be the real deal after all. Who would have thunk it? Now, it’s one thing to get exposed on the ground by a superior BJJ fighter in Thiago Silva but getting knocked out by James Irvin in eight seconds is pretty devastating stuff. I wish Alexander would have also been a little more gracious in defeat. Remember how he claimed Keith Jardine didn’t rock him in their fight even though that was clearly the case? Same deal last night except he didn’t end up winning this one. Anyhow, good for James Irvin. He’s scored some notable wins over the likes of Terry Martin, Doug Marshall and Scott Smith but this has to be considered the highest-profile victory of his career.

2 thoughts on “A Long Time Coming”