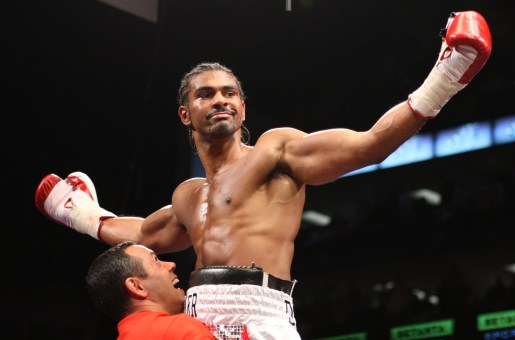 A few thoughts from, once again, a great night of fighting. This time, though, boxing gets the unanimous victory over MMA…

1. Just in case you weren’t convinced, David Haye has finally arrived…and now he hopes to arrive in the heavyweight division. I had a feeling this fight wouldn’t go the full twelve but I surely didn’t expect a second round stoppage. Maccarinelli did seem to take a couple more shots than needed at the end but a brilliant performance by the Hayemaker.

2. Highlight of the night part I: Haye’s post-fight interview. Amazing promo. I loved that he called out Klitschko and the rest of the “Heavyweight bums” (his words not mine). This man has “it.” He talked in third person, called out everyone and even plugged Cage Rage!

3. Highlight of the night part II: Tom Watson’s knockout of Pierre Guillet via up-kick at Cage Rage 25. I guess that kick was the perfect kryptonite to neutralize the superman punch. (I actually wrote that line before Mauro used it in the Grove-Broughton fight so I guess great Canadian minds do think alike).

4. Hightlight of the night part II: Oleg Maskaev walking into the ring wearing a sombrero.

5. I thought it was a huge mistake to have Ken Shamrock fight before a potential bout against Frank Shamrock and/or Kimbo Slice and I sincerely hope that last night was his final appearance in a cage or ring. In other words, I have absolutely no interest in seeing him fight Kimbo on CBS or anywhere else for that matter. If 2007 taught us one thing it’s that if there’s a money fight to be made…MAKE IT. This sport is way too unpredictable to have tune-up fights before the big money ones.

6. Looks like we’re getting Klitschko-Peter next however it seems unclear as to which Klitschko that fight will be against. Here’s hoping it’s Wladi. Peter made strongest case to get a rematch against Wladi and no one can argue that it’s the most intriguing Heavyweight fight out there.

7. Hey MMA broadcasters, want to know how to get a fighter over? Watch last night’s profile on Juan Diaz. What a breathe of fresh air. I am so sick of all these black-backdrop pre-fight packages where two fighters talk about how this is their destiny and blah blah blah. Sure, the formula worked for the UFC but it’s time to think outside the box a little. Unfortunately, the fighter has to win for all that to matter.

8. That was one ginormous ring in Cancun.

9. One note from Friday night’s Ring of Combat event: What’s up with Krzysztof Soszynski and all his fights ending in controversy? Here’s what he wrote to me after the bout:

“How did you like the 6 nut shots? I was not a big fan. I thought at 1 point I was going to throw up my right nut.”

A little too much info but I feel your pain Krzysztof.