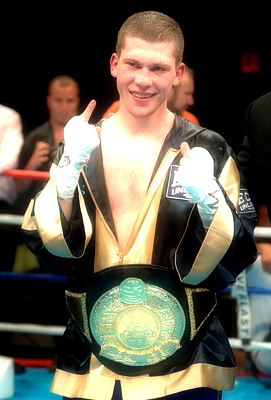 Prior to World War II, Jewish boxers were the norm. Believe it or not, some of the sport’s brightest stars were Jews. Fighters like Abe Attell, Reuven Goldstein and Maxie Rosenbloom were as good as any and while they did share the same religion, back then, they were known as great boxers who just so happened to be Jewish.

Nowadays, things are a little different. The Jewish boxer is more of anomaly. So, when I first heard about Dmitriy “Star Of David” Salita – a practicing Orthodox Jew who refuses to fight on the Jewish Sabbath (sundown on Friday evening to sundown on Saturday) as well as on all Jewish holidays – I was instantly intrigued. When I found out he learned to box after moving to Brooklyn from the Ukraine to fight off school bullies, I instantly respected him. And when I watched him dominate Shawn Gallegos to capture the NABA Light Welterweight title in August 2005, I instantly became a fan.

You see, where I come from one can not help but hear about every athlete who just so happens to be Jewish. Never mind if he rides the pine for a D-II basketball team or is a third string CFL right guard. If you’re a Jewish athlete in the public eye, I have probably heard of you. But Salita is the rare 21st Century Jewish athlete who is actually good. In fact, he is 27-0 with 15 knockouts kind of good!

However, the biggest question surrounding the 25-year-old Salita is when is he fighting next? His last fight (a unanimous decision win over Grover Wiley) was almost ten months ago. Prior to 2007, he fought at least three times a year and sometimes up to six. So, why did he just fight once last year? And why doesn’t he have any upcoming fights lined up?

Things started to make sense when news broke that Salita and promoter Lou DiBella were cutting ties effective immediately. That was my cue to reach out to Salita and find out why he hasn’t fought since last March and what the future holds for his budding career.

(For more on Salita be sure to check out Jason Hutt’s tremendous documentary entitled “Orthodox Stance.”)

8 thoughts on “Dmitriy Salita Moves On To Bigger And Better”