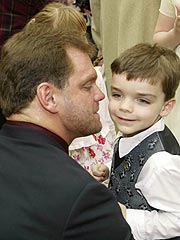 For our entire (and now complete) countdown click here.

#1: Crippling
What: Chris Benoit murders his wife, Nancy, son, Daniel, and then commits suicide
Where: Fayetteville, GA
When: June 22-24, 2007

I will never forget the day I heard the news. I received a text message from one of the top wrestlers in the industry who I befriended on a movie set earlier in the year. The message read:

“Dear Ariel,
Chris Benoit and his family are dead. God Bless them all. Call you later.”

My body went numb. I was in total shock. I ran to my computer to confirm the tragedy and he was right: Chris, Nancy and Daniel were all dead. A few hours later, Monday Night Raw aired and, well, you know the rest.

In a year filled with so many great MMA and boxing moments we, unfortunately, end on another tragic wrestling death. Once again, 2007 saw the industry forced to deal with its general slew of deaths but this one was, sadly, on a whole other level.

There’s nothing more I can add to this story. I have been sitting here for an hour thinking of a nice way to wrap it up but I can’t. I hate thinking about it. I hate to think of all the gruesome details. I’m ashamed to admit I ever admired Benoit and, for a time, I was ashamed of the business.

Some say good will come out of this. Congress will investigate the industry and clean it up for good. Maybe so (I doubt it) but it will never be worth it. A little boy and his mother died AS A RESULT of the industry. And If you think this murder-suicide had nothing to do with wrestling well, then, there’s really nothing more I can say.