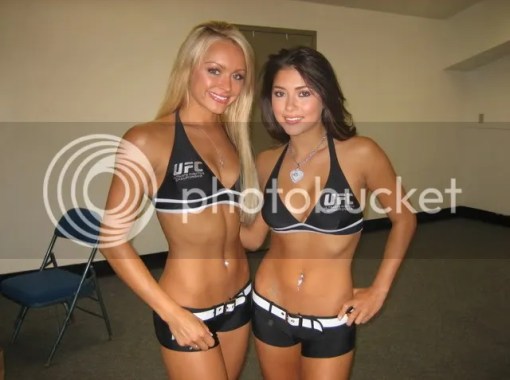 Last month, Ali Sonoma (left) announced her departure from the UFC as one of their Octagon Girls. This news saddened many MMA fans so, in the interest of putting a smile on all their little faces, I present The Park’s exclusive interview with one Ali Sonoma:

Ariel Helwani: Why did you decide to leave the UFC last month?

Ali Sonoma: I’m hosting a reality show in January and filming a movie in Hungary in March. I have bigger and better things to conquer.

AH: Was it an amicable split?

AS: Yes. UFC wanted to keep the demographic fresh and I have movies to film.

AH: How did you first get in contact with the promotion?

AS: I was in a modeling contest followed by a reality show. (I) placed second in the contest (and) fate brought me to UFC and I won it.

AH: Were you a fan of mixed martial arts prior to signing with the company?

AS: Yes, I kickboxed for years and was always interested in martial arts.

AH: What was the best and worst part of working as a ring card girl for the UFC?

AS: The best part was the whole experience – Traveling to many different places and meeting new people. The worst part was when you see a fighter you favor get beat.

AH: What was the greatest fight you witnessed in person?

AS: There are too many to count. I really liked when Jackson beat Liddell – it was so unexpected. I also liked when Couture came back from retirement and won the heavyweight title…he rocked that.

AH: There was some speculation that your relationship with UFC fighter Diego Sanchez upset key members of the organization. Did they ever mention anything of that sort?

AS: I never got any “rules” related to dating. UFC did not particularly favor us going out but you can’t help who you fall in love with, it just happens. Once it was official, everyone seemed to freak out – either loving it or hating it. They seemed to blame me for his last losses. I never got in the way of his training, I never even saw him during that time. If anything we supported each other.

AH: Is there a rule in place that says fighters can’t date ring card girls?

AS: No, I never had a contract with UFC. I was an independent contracter – doing what I wanted.

AH: Are you and Diego still together?

AS: No, we decided to call it quits based on our careers. I will be away for months…we are still best friends, though. We talk everyday. I do and always will love him. He is on a different level of any guy I have ever met.

AH: Where can fans of yours see you next?

AS: Most likey on FX or MTV for the reality show “The Mag” and in the film “Say Goodnight” and many more films to come.

17 thoughts on “Ali Sonoma Is Moving On Up”