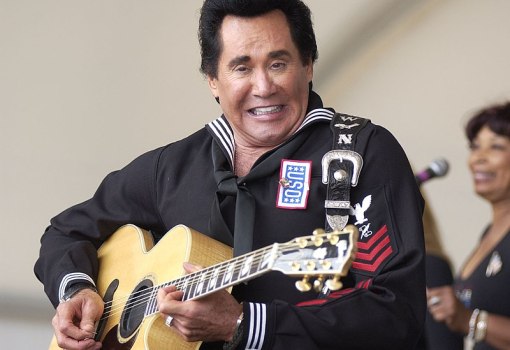 I just received this press release and while I usually don’t post these this one was just too good to ignore. I didn’t think Mayweather could top the Cinco De Mayo outfit he wore to the ring before the De La Hoya fight but come Saturday night he most certainly will. Love him or hate him, the man knows how to put on a show (if you consider Wayne Newton carrying a boxing belt to the ring a show. I definitely do). This makes Wayne Rooney coming out with Hatton before the Castillo fight look completely normal.

HELIO, MARK AND WAYNE SET TO CARRY BELTS AND WALK WITH FLOYD FOR WELTERWEIGHT CHAMPIONSHIP BOUT
LAS VEGAS (December 6) Dancing With the Stars winner and two-time Indianapolis 500 Champion Helio Castroneves, along with fellow competitors Texas billionaire and Dallas Mavericks owner Mark Cuban and renowned entertainer and “Mr. Las Vegas” himself Wayne Newton, will accompany six-time world champion “Pretty Boy” Floyd Mayweather, also a participant on this year’s show—into the ring Saturday night when he fights undefeated British icon Ricky “The Hitman” Hatton for the WBC and Ring Magazine welterweight championship at the MGM Grand in Las Vegas and live on HBO Pay-Per-view. The trio will carry Mayweather’s decorated title belts during the Champion’s celebratory ring walk and join him in the ring for the official announcement moments before the start of the fight.
In addition Castroneves and Newton will join Mayweather Friday for the fight’s official weigh-in at the MGM Grand Garden Arena. More than 5,000 fans are expected to attend and the event will be distributed live via satellite to national and local television stations across the country.
“Dancing With the Stars was such a great experience for me this year and now to have Helio, Mark and Wayne be a part of my real world makes it that much more meaningful,” said Mayweather.
“We all knew Floyd could dance but now we have a chance to watch him really do his thing in the ring,” said Castroneves, who will be attending his first live boxing match. “I will leave my trophy at home so I can carry Floyd’s belt and show him my support for one of the biggest fights of his career.”
“Floyd is a great guy and a hell of a competitor,” said Cuban. “I can’t wait to watch him fight and I’m honored that he has become a good friend and has asked me to carry his belt for the fight.”
Floyd’s the best in boxing and I am looking forward to see him work his magic this Saturday,” said Newton. “He dazzled them on Dancing With the Stars but this is where he truly shines bright and it will be an honor for me to bring him into the ring, carrying one of his belts. Us Vegas guys have to stick together.”

6 thoughts on “Eat Your Heart Out Wayne Rooney”