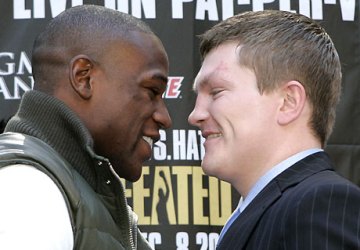 …The outcome of this Saturday’s Miguel Cotto vs. Shane Mosley fight:

“I see it as an easy fight for Shane and I predict an early KO,” Mayweather said.

“I think Shane Mosley will because he will Cotto problem with his speed and movement. Last time out, Cotto looked strong but didn’t carry the same finesse at Welterweight as in previous fights. He looked a little crude against Judah. Cotto will need more finesse against Mosley.”

Is it me or when this fight was first announced everyone picked Cotto but suddenly, for whatever reason, the tide is starting to turn in the favor of the Sugar Shane? Perhaps the boxing world should hold off on the Cotto coronation for a couple more days.