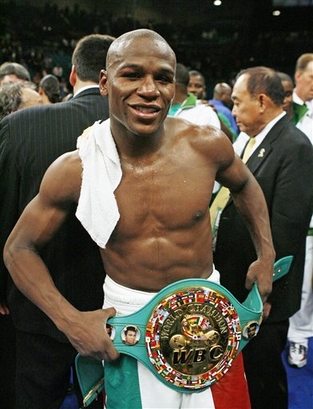 Two big fights left on the 2007 boxing calendar: Mosley vs. Cotto and Mayweather vs. Hatton. Not a bad ending to what is shaping up to be a record-breaking year in the world of boxing. (Who said this sport was dead, anyways?)

A quick look at 2008 shows some potentially exciting fights on the horizon, as well. Pavlik vs. Taylor II seems to be a foregone conclusion. Would love to see it again. How about Calzaghe vs. Hopkins? Sure, Hopkins is a little grizzled but it certainly would be intriguing. And if B-Hop turns down Calzaghe here’s hoping my fellow Montrealer, Lucian Bute, gets the shot. Youppi!

But let’s just say Mosley sneaks by Cotto and Mayweather (as expected) defeats Hatton could we potentially see Mosley vs. Mayweather sometime next year? Mosley hopes so:

“I want to have it (a fight against Mayweather) because I want to show people I’m the best fighter right now in the Welterweight division…So, I’ll start off with Cotto and then we’ll end up with Mayweather if he wins.”

First and foremost, it would behoove Mosley to concentrate solely on Cotto but a fight in which he defends the honor of his fallen friend/promoter, Oscar De La Hoya, would be tremendous.